For 3 hours I was present in the company of true love. The kind that you can tell has weathered many storms, and lasted. The kind of love that inspires, and makes your heart melt.

I was a mere child when I had attended their 25th wedding anniversary celebration. I was too young back then to understand just how well connected these two were. I just knew them as Uncle and Aunty, our loving and caring family friends.

Now, 25 years later, here I was in their home seeing them in a new light, through the eyes of a woman.

They greeted me into their home as one of their own… welcoming me with warm hugs and smiles. We reminisced about those 2 years when my family was in Canada. Aunty made oh-so-yummy aloo and gobhi parathas that I stuffed myself silly with! 🙂

Over our meal Uncle told me how he had varied interests and joked about how he wasn’t much of a scholar, referring to himself as a ‘Jack of all trades’. To which his sweetheart added: “He says I am the jack of all but master of none. But I say… you are MY jack” 🙂

The conversation flowed. They talked about little everyday matters. They inquired about my parents and my family, and shared updates about their daughters whose kindness I still remembered.

They addressed each other as Raje (King) and Rani (Queen), their sweet terms of endearment for each other.

Soon the conversation shifted to the family room and over cups of chai we poured over their family photo albums. Out came story after story. How they got married while she was still finishing up her education. How they were separated a while and how he would find excuses to come visit her. How he valued communication for the health of a relationship! 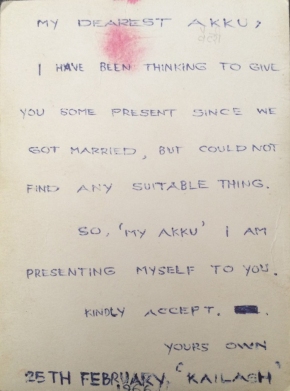 Then, with much pride and love, he dug out one of his cherished gifts to her… one of his pictures that he had sent her in 1966. He now shared the note he had written on the back. It read, “My Dearest Akku”… (her name is Alka)

Me: “Aunty, has Uncle always been this romantic?”

Aunty: “Always! He will never get old”, she said almost blushing! 🙂

And looking at picture after picture I saw a beautiful bride, an adoring wife, a happy, peaceful woman with a powerful presence herself… with a loving, kind man who is not shy about declaring his love for her, over, and over, and over again…

I don’t know if they noticed the smile plastered on my face during the bulk of our conversation! 🙂 This time with them was just beautiful to me!

In passing they mentioned their 50th wedding anniversary was coming up in a few months. So, with their permission I took a few pictures, and then a few more without… hoping to beg for their forgiveness later, for my intent was to simply celebrate their love via this note!

Raje and Rani — you inspire people like me in ways that you might not even realize! To see two people connected like this is like watching a sweet romantic movie come to life! It makes me believe that it is possible to ‘make’ happy endings in life if two people really choose to be present to each other, and to celebrate each other every day.

Here’s to you Raje & Rani (Mr. & Mrs. Dhir) on your 50th wedding anniversary! May you live, love, and inspire together, for many MANY more…